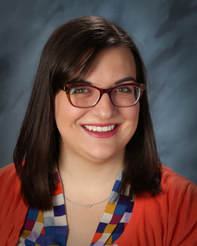 Ms. McCulloch (or Ms. M, for short) began her Speech & Debate career when her mother and freshman year English teacher conspired to make her join the Speech & Debate team in spite of her painful shyness.  Though she initially put up quite a fight about it, Speech & Debate evolved into a huge part of her life and one of her greatest passions.  She competed in interpretive events during her four years at Arapahoe High School in Centennial, CO.

While attending Colorado College and earning her Bachelor's degree in English, she was an initial member of CC's growing Speech team (the CC Debate program had been well established in Parliamentary debate for many years before).  While competing in the college circuit, she qualified for and competed at the American Forensic Association's National Individual Events Tournament (AFA-NIET) in multiple events for two consecutive years.

After completing her undergraduate degree, she remained at CC to earn her Master of the Arts in Teaching degree.  During her graduate studies, she continued to help with CC's Speech program.  She also worked with the LD debaters at Cheyenne Mountain High School, where she completed her student teaching and internship.

Ms. M cannot be more thrilled to be on the other side of Speech & Debate and coaching at Eaglecrest.  She teaches CP English 9, the two Speech & Debate electives, and is an English Tutoring Center co-director.  Ms. M is an active member of the Colorado Speech & Debate coaches community, currently serving as the CHSAA Speech Activities Committee chair (2021-2024), the 2022 CHSAA State Tournament Director, a member of the Colorado NSDA District Committee, and is an active participant in numerous coaches groups that focus on topic such as diversity, equity, and inclusion in Colorado speech and debate and judge recruitment and retention. She has served as the CHSAA Region II Director (2016-2021) and has presented numerous conference presentations at both local and national conferences on topics like building team community, developing team management strategies, and strategies for coaching different competitive events.

When she's not coaching after school, attending tournaments on Saturdays, or keeping up with mountains of grading, she can be frequently found spoiling her dog, concocting new cookie recipes, burying her nose in a book, spending too much time on the internet, or attempting to teach herself how to crochet.